Collect a range of research around the theme of Western using primary and secondary research to use as reference material and ideas generation. Annotate and critically evaluate your research.

Instead of a mind map, I decided I would do a list, this allows me to lay out all these different words without having to worry about laying them out neatly. 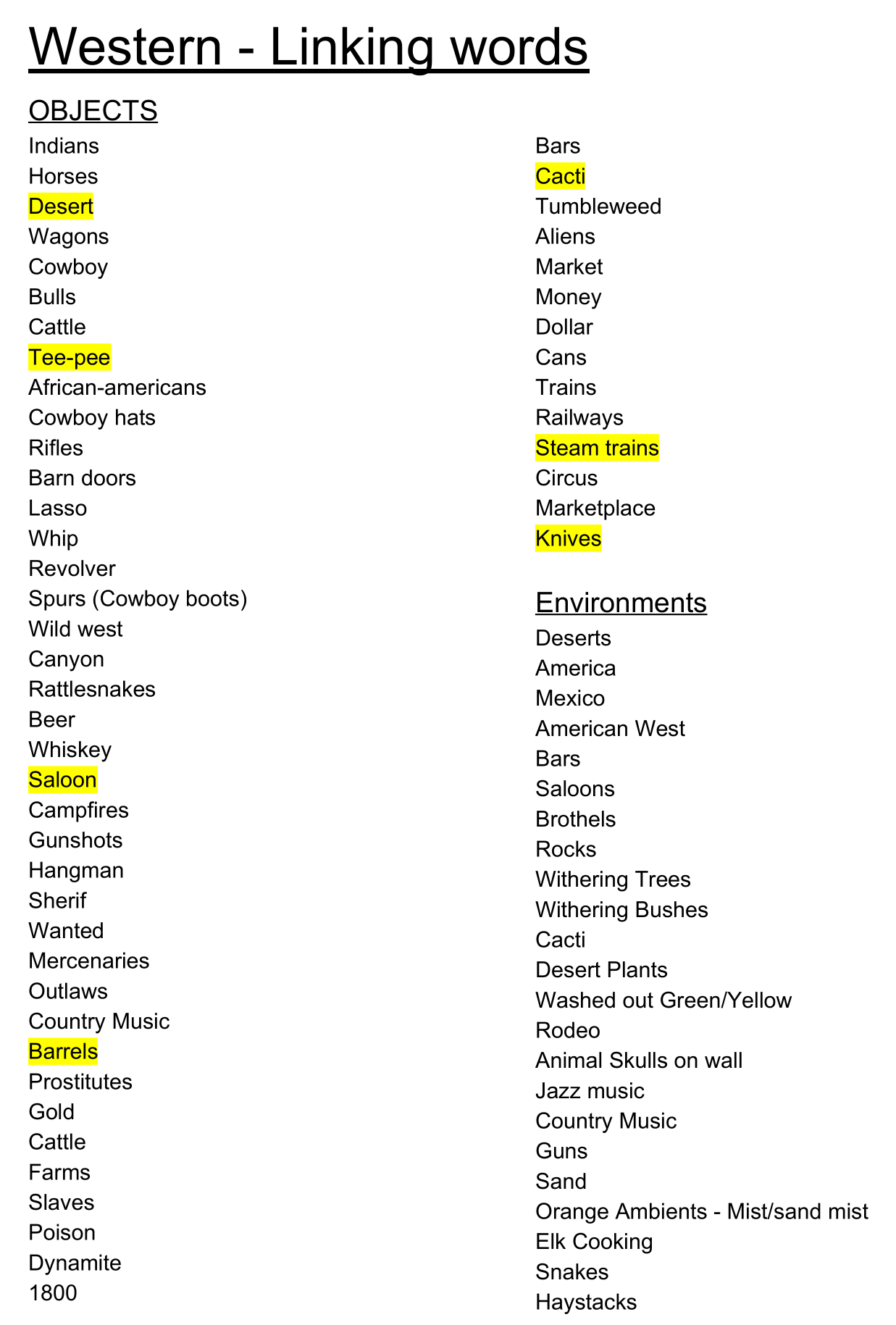 I got these words by asking my dad about what he thinks links with Western, then asking my brothers, and then expanding upon that, finding words which link and similar words, I also done some research into western games, and deserts and all the words which linked and caught my eye, getting even more ideas from images on google images.

The colours for this mood board consists of oak, and leather browns and shiny silvers and golds, which are a stark contrast but commonly seen together with knives and tableware etc. They’re not bright blinding colours, they are dull colours, and the browns could be used to blend into clothing to make the knives easier to hide.

The designs of the knives and very etiquette and unique, there are some delicate designs and marks on the handles and scabbards of the knives which make each knife unique to its owner, these knives may have been hand-made for them so the designs on the knives are different for every person to suit what they would like, the knives are small, and easily accessible so they’re able to be taken out quickly whenever they need it, and the scabbards usually have a belt or something to attach them to a belt around them. The knives themselves aren’t as unique as the scabbards, the blade is usually smaller than then handle for blade hunting, but sometimes they can be longer, the shape of the knife blade is different for what you want to use it for too.

For a knife, I can see someone making a very detailed 3D model of a western themed knife, using normals and bump maps to bring out the detail in these knives, I can also see an Artist using this mood board to help them with character design of a western character, or if they’re making a building, perhaps there would be a knife like one of these laying on the table, this can apply for both 3D Modellers and Artists.

I might use this research to help me with finding assets to use with my level design, if I can find a 3D Model of an asset which looks similar to this, I can perhaps implement a knife battle system.

The colours for this mood board mostly consist of green, obviously, along with some brown/gold desert colours, since cacti are mostly in the desert. The shades of green can vary for each different cacti, some cacti may look more of a blue shade then others, and some cacti may look more bright green. Cacti also sometimes have flowers on them, which can be lots of different colours, but I mostly see pink flowers on them.

The design for cacti are different depending on what cacti you go for, some cacti are tall and narrow, some are short and plump, some don’t even have a big body and just look like leafs with spikes on.
Cacti have lots of different spikes on them, and flower buds, some cacti aren’t entirely round, they have a bumpy surface which is consistent around the whole plant.

For cacti, I can imagine, a 3D modeler can use them a few different ways, firstly, they can do a simple low poly cactus, just a plain green marterial which is put on a mesh in the shape of a cactus, but if a 3d modeler wants to be more detailed, they can make it more realistic, with spikes and different shaped plants.
An artist would use these if they were doing a desert landscape piece, cacti wouldn’t be used on a building piece unless it is around the outside or inside in a plant pot.

I could use this research to find models and assets which I can use for my level design if I wanted to design a level which is outside in a desert.

The colours for a steam train, even though a lot of these aren’t actually in colour, would be dull, greys, golds, browns, blacks and in some cases, reds and blues, there really is no need to have brightly coloured steam trains since they’re nothing like a piece of clothing or artwork, steam trains are just transport, and transport doesn’t need to have lots of bright flashing colours.

The design of steam trains are very Victorian, with lots of little parts and details in the train which are needed to keep it functional, they look a lot more angular and aggressive then the trains we ride today.

The 3D modelers would probably just model a steam train, nothing much more since they are far too detailed to model in the amount of time we have to do this project, I don’t think steam trains can work well with a low-poly style since you wouldn’t be able to show all the small parts which make steam trains recognizable.
Artists could draw a steam train level diorama, which delves into western since the train could be broken down and in a desert/western looking town.

I might use this research to help me make level design of a western village/town, there could be a steam train on the tracks which run down the side of the town which can run through every 10 minutes.

The colours for these barrels will only consist of browns and silver or black metals, I can’t see a barrel being made out of any other colours.

The design of a barrel is a rounded cylinder, curved in the middle section slightly, barrels are wooden planks which are held together by pins and metal wrapped around the edge.

For barrels, both low-poly and high-poly work fine, the only problem with that is if it’s high poly there might be lots of unnecessary polygons, considering a barrel is a very simple shape and all the detail would mostly be on the maps and textures of the model.
For an artist, barrels won’t be too hard, they can just be simply drawn in the diorama.

Barrels, I feel could be used a lot in a western-themed level design, you could have barrels outside a building, barrels blocking your way, barrels as an obstacle, barrels as something like a pick up object which you can get once breaking them open, and so on.

The design for these are very pretty at times, large tent looking structures held up by long pieces of wood, and then they’ve got unique designs around the edge.

I can imagine 3D modelers can model a few of these, and for each one, adjust them slightly so they all look unique, add different designs to the edge of each one and then change some of the sizes for each new one, for example, one of them could have larger sticks poking out the top, one of them could be wider, one of them could be more narrow.
An artist could paint a camp of tee-pees, I think that would look nice, or they can create a huge tee-pee design

I think it would be cool to have a level design where it’s just a camp of tee-pee’s which are scattered around with different obstacles in each one.

The colours of these saloons mostly consist of browns and greys, considering the whole building is most likely made out of wood and wooden planks, they also will have wooden fences and support beams.
Some saloons will have a bit of colour on them, usually red tones, and signs which would be a different colour.

The design of most saloons have the same sort of shape, they are a slightly narrowed square building, with a slight extension on the top where they put the signs on, most saloons look old and decayed, the doors a swinging half-door and the inside similar to the bars and pubs we have today.

The colours for a desert consist of lots of yellows, golds, browns and faded greens, this is because deserts can’t have too many plants and for the plants that are in deserts, they’re usually brown, and faded colours, the buildings too, follow these rules with being very faded.

The design of a desert would consist of buildings, dead-looking plants, lots of sand and people with cowboy hats, and there may be a few rocks scattered around.

For desert for 3D modelers, you can either go with a landscape of a desert with really realistic sand textures, or you can go with a low poly desert where the ground is all one flat colour or a really simple texture, but a must-have for these desert landscapes would have to be sand particles, flowing around.
For artists, they could draw an entire, empty, deep desert landscape with a few lone rocks and cactus scattered around